Make sure everyone in your team is aware of what's happening across the business. This template is perfect to showcase weekly progress and planned activities.

The weekly team update is a staple of many organizations. It's a time to come together and share what everyone has been working on, what's coming up, and anything else that's important.

For some, the weekly team update is a dreaded task. It's yet another meeting to add to an already packed schedule, and it can often feel like a waste of time. But it doesn't have to be that way!

The weekly team update doesn't need to be a novel. In fact, it's better if it's not. Keep your update to a few paragraphs at most.

Stick to the important stuff.

Your team update should cover the most important things that happened in the past week and what's coming up in the next week. That's it! You might find that using our Daily Standup Template makes it easy to look back on the week to piece together your update.

Be clear and concise.

Use clear and concise language in your team update. Avoid jargon and technical terms that not everyone will understand.

Bullet points are your friend when it comes to team updates. They make your update easy to scan and understand.

Before you send out your team update, take a few minutes to proofread it. Check for typos, grammatical errors, and clarity.

Send it out on time.

The weekly team update is a valuable tool for keeping everyone on the same page. By following these tips, you can write a team update that's actually useful.

How to use this Weekly Team Update template 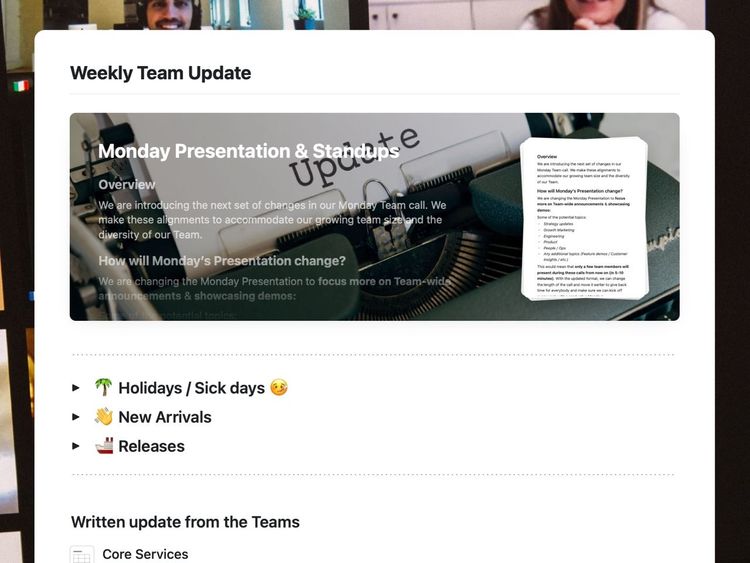 Use This Template Open Template

Invoice Template (hourly rate)
Create and send invoices in seconds with this free template for hourly or daily rates
Online Course Template
Create an online course with Craft. This type of course could be sold to customer or given away as a free demo.
Job Description Template
This template helps you to create and share a beautiful job description to attract the best people for your team.
View All Templates

Organize any time, anywhere across your entire ecosystem - on or offline

Just open, write and organize - no interruptions, no heavy-lifting, no steep learning curve

Personalize to your heart’s content - you run the app, not the other way round

Blocks, tables and markdown, subpages, cards and bi-directional linking - craft is jammed with brilliant features that make styling and formatting a breeze

Get in or get out

Native iOS stores content on your devices, so you’ll never lose your flow

Quickly share with your clients, across your team - or just with your BFF

Probably the best app community in the world

The best support team in the world. Period.