Filmcraft: How a Documentary Maker Used Craft to Make a Movie 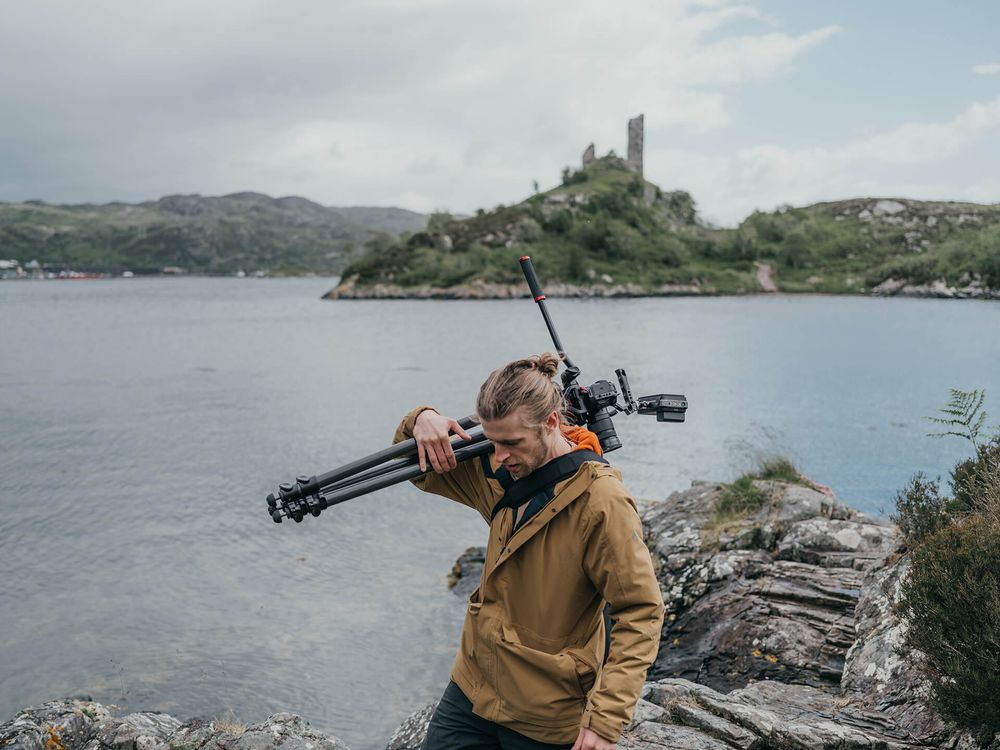 Filmmaking is not easy. As freelance documentary maker Doug Turner explains, the work required to take an idea and transform it into a finished film showing at festivals and streaming on Netflix is a long and painful path.

Doug is currently walking that path with his documentary The Wake. The short film explores the life of a lone creel fisherman on Scotland’s The Isle of Skye, struggling to keep his craft alive in the face of ecological destruction from industrial-scale trawling.

Two years into the project, we talked to Doug about the documentary filmmaking process; from taking a kernel of an idea and transforming that into a fleshed-out treatment, to how he approached the pitch process (and got his film funded by one of the world's biggest camera companies), and how he's approached the actual filming and photographing of his documentary. Plus all the other nitty-gritty that goes into making and sharing a story on film. 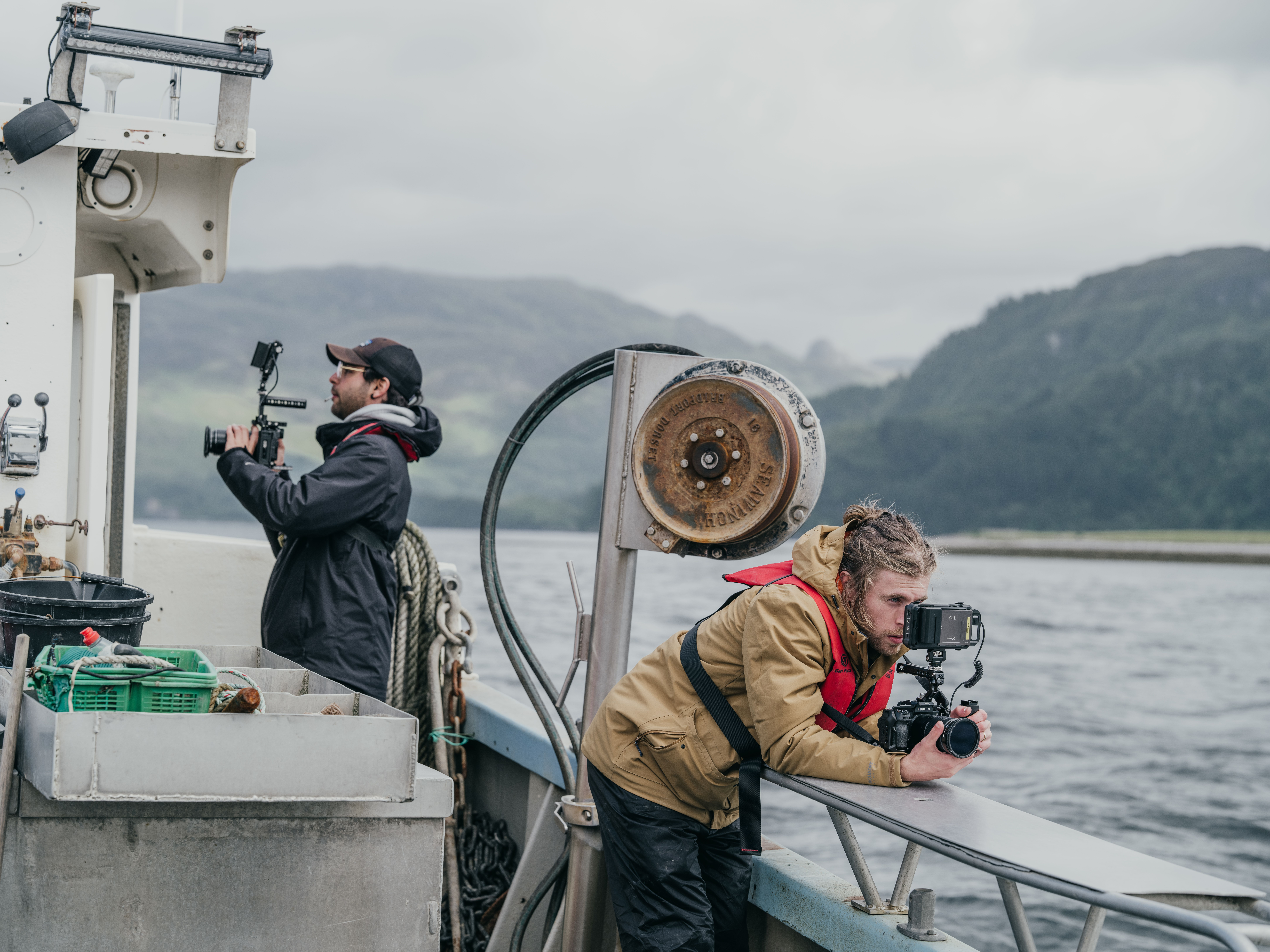 Why did you want to make The Wake?

I wanted to make a film about a heritage industry in the UK, either farming or fishing. Originally, I was considering scallop fishing because they have an issue with dredging. But as I did more research I came across Bally and his creel-boat.

Bally fishes the Inner Sound Of Skye, on the West Coast of Scotland. The story hones in on the struggle between Bally's traditional and more sustainable way of fishing vs the mammoth trawlers which destroy much of the sea-life and leave trenches in their wake. 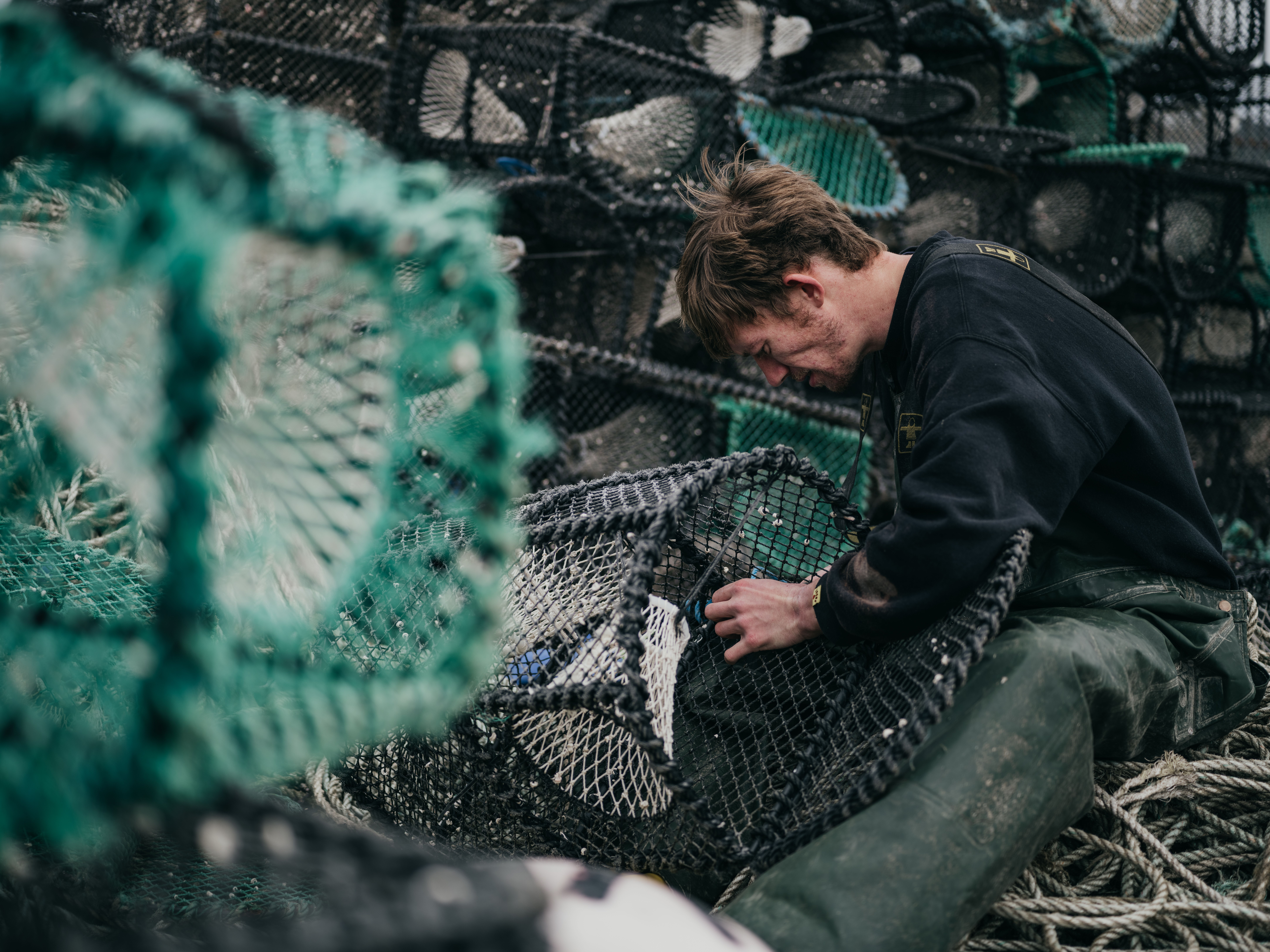 After making contact with Bally, I drove up to The Isle of Skye to meet him. I quickly knew I wanted to make a film about him. Not only is the area very visually appealing, with so much moody beauty to capture, but there's also the personal story of Bally himself.

I won't give too much away (you'll have to watch the film!) but he's a complex character which adds a lot of interest to the narrative. Once I knew I wanted to tell Bally's story - the hard work began.

As a film maker - the first part of the process is to write a treatment. This is essentially a plan of what the film is about, who it's about, how it will be made, how it will be distributed and other details like budgets and locations.

The treatment will make or break your film - before it's even made. Because if you can't convince people to fund your film, or work with you on it - it's a non-starter.

So - I wanted my treatment of The Wake to be a really stunning and well-organized document that would help me sell my idea.

How did you create your film treatment?

In the past I have used various tools to write treatments but I for The Wake I used Craft.  This enabled me to plot out my sections - Synopsis, Background on Bally -  the main character, budget details, my own filmmaking credentials, and filming dates.

Craft is highly visual so was ideal for displaying the assets I was starting to collect: photos, short reels of footage, and also visual references - how I wanted my film to look in terms of the color pallets.

I used Craft to pull all these materials together in a single document, but with different pages for each section, all easily browsable. Done in this way, the treatment really brought my concept to life and maximized my changes of attracting some attention - and later funding. 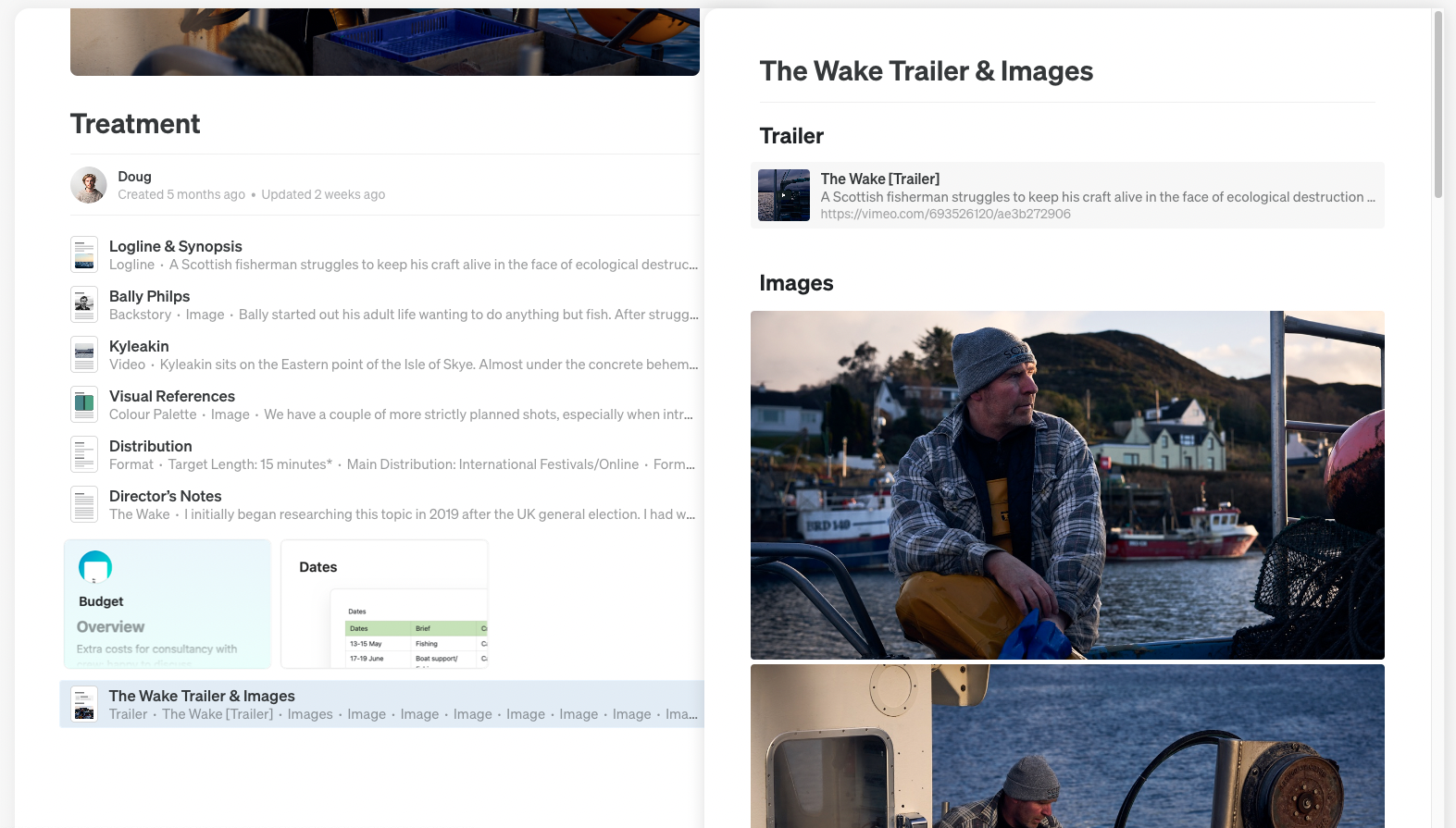 Any tips for getting your film funded?

There are numerous companies and bodies that offer funding opportunities but it's very competitive.

So you need to really catch the eye of the 'judges' and sell the film to them.

How? Firstly on an emotional level - they need to want to see your story on film. Secondly, on a practical film-making level - you need to convince them that you have the technical skills to actually deliver on your vision.

You have to convince them that they will recognize the final product. You have to pitch to them like with any story -  a beginning, middle and end.

And you have to present this to them in a visual, easy to understand format. I put everything together in Craft. And it worked! Fujifilm offered me both funding, and specialist camera gear to make The Wake. 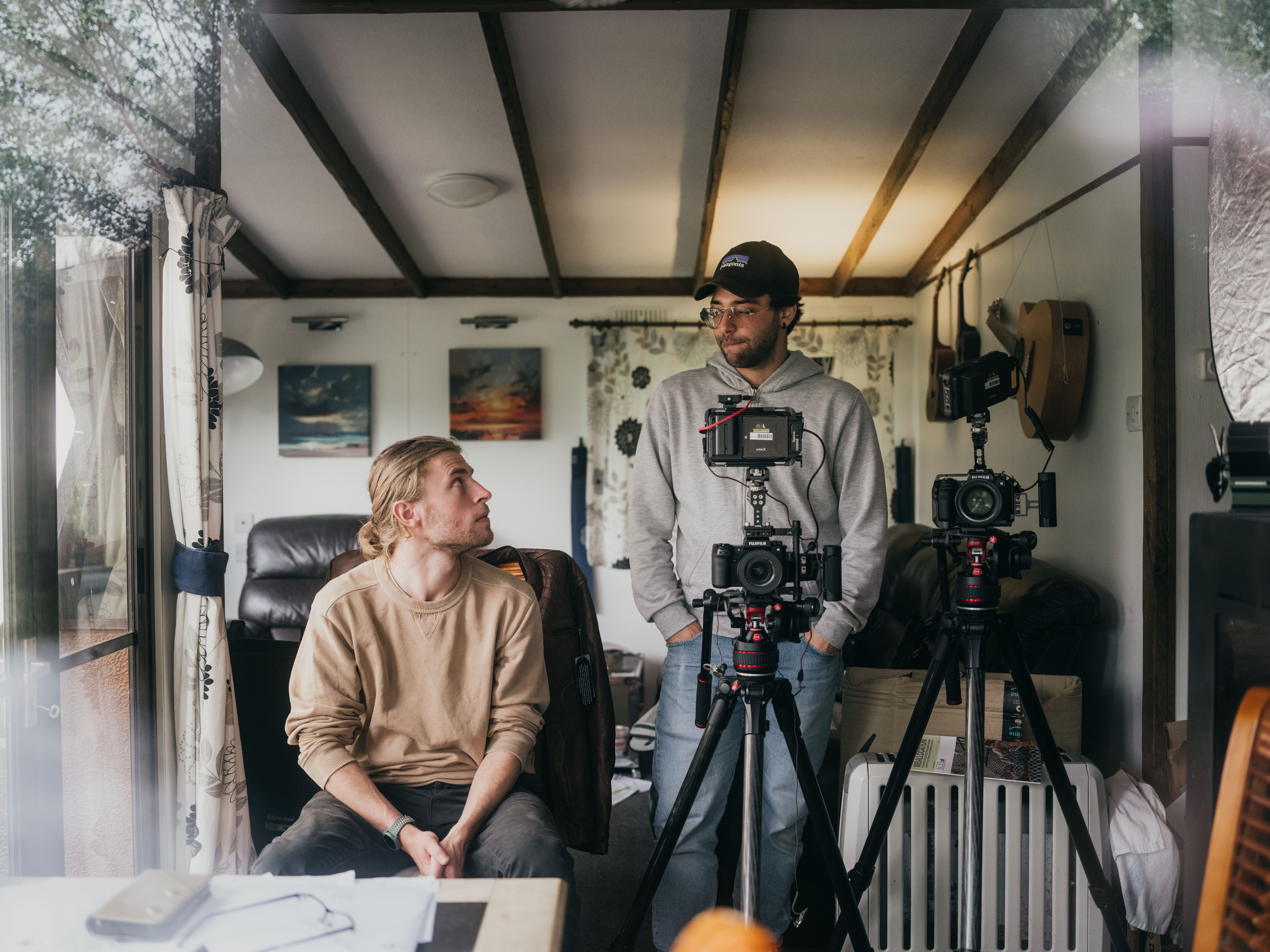 How did Fujifilm become involved?

Fujifilm have a grand challenge every year where they offer money and cameras. Our initial application did not win, but Fujifilm immediately reached out and offered us funding and support in a different way. They said we'd gone ‘above and beyond’ with our pitch, which was lovely to hear considering they are seeing hundreds or even thousands of pitches each month.

It's not just about making a pitch look good, but making it super easy for them to access and understand. Craft enabled us to bring our idea to life in beautiful and perfectly organized way which obviously caught their attention and made them want to work with us.

It turned out that our film aligned really well with a new project they were working with, involving some new camera equipment they had released, so they got in touch and made us an offer.

We would not have won the support and funding to make this film if it wasn't for the way in which I laid out the pitch in Craft.

How do you collaborate with your filmmaking team?

I have a team of three: a producer, a cinematographer, and a director. As freelancers, we all have other projects on the go so Craft works really well as a central place where we can flesh out ideas, add comments and make edits - asynchronously.

The ability to access a shared space has been vital during the whole process. It made it super easy and quick to make edits and make everything look good. I was able to take materials that others in the team had collated, and quickly arrange them to make them look quite striking.

Another reason Craft worked well was how it syncs smoothly across my phone and MacBook and works offline. That was especially handy because it enables me to work on the go. For example, I was able to write all my interview questions for Bally on my phone, during a flight.

How do you manage all the admin of filmmaking?

There is an awful lot of admin that goes into making a documentary. Typically, film shoots - even for short films - have teams of 10 or 20 people looking after that side of the process but as a team of three, I was wearing many hats.

There is a huge amount to think about, plan and organize: film equipment, kit lists, shot lists, interview questions, right down to the practicalities like accommodation, transport, and all the budgeting involved.

Craft allowed us to ensure we had all our bases covered; everyone had access to all the information they needed, at all stages of the project. This was really important because we were filming on the Isle of Skye in the northwest of Scotland, which is a 10-hour round trip from my home in Edinburgh. Forgetting to capture a vital shot, or leaving behind a piece of equipment would be hugely detrimental to the project (check out the Shooting Schedule Template that Doug used to keep everything organized).

Craft makes it so easy to capture all the threads - the thoughts, the lists, the plans - and distill them into a single place where everyone can find (and update) the information at any time. It's like bringing everything required for the project into one easy 'cloud'.

What’s next for The Wake?

Once we’ve finished editing, the next stage will be to apply to film festivals and look into distributors like streaming platforms. The goal is to have The Wake premiering at some of the respected festivals and then get it onto a streamer so more people can see it.

I’ll be using Craft for various parts of those processes, like drafting applications, fleshing out contracts, and just keeping track of all the other pieces of work required to get Bally’s story seen by more people.

Doug Turner is Craft’s in-house filmmaker. You can read more about Doug’s backstory in our People of Craft collection where he reveals how previous film projects in exotic locations led to him eventually discovering Bally: Seeking Stories: The Filmmaker and the Creel boat Captain.

You can also watch more about the making of The Wake here.

Explore the actual documents Doug used to help create The Wake, and use them to inspire your next film:

Craft AI Assistant is here
The vast power of advanced AI, now inside Craft. Go faster, catapult your creativity, and optimize information in seconds. Productivity, elevated.
From Pastors To Pomodoro Playlists: 6 amazing uses of Craft
Discover a few of the ingenious uses of Craft by our community, from pastors to podcasters to playlist compilers as we showcase their Craft work.
Craft - The Origin Story
Every product has it's story - and we're happy to share ours. Hear the details behind the inception of Craft from Balint Orosz, Founder and CEO of Craft.
View All Posts