How to elevate your design: Daniel Korpai on moving fast, muscle memory and lifestyle metrics

Daniel Korpai, Head of Design at Craft, explains how he went from business and marketing psychology to design, why building fast is so important, and how gadgets transformed his life. 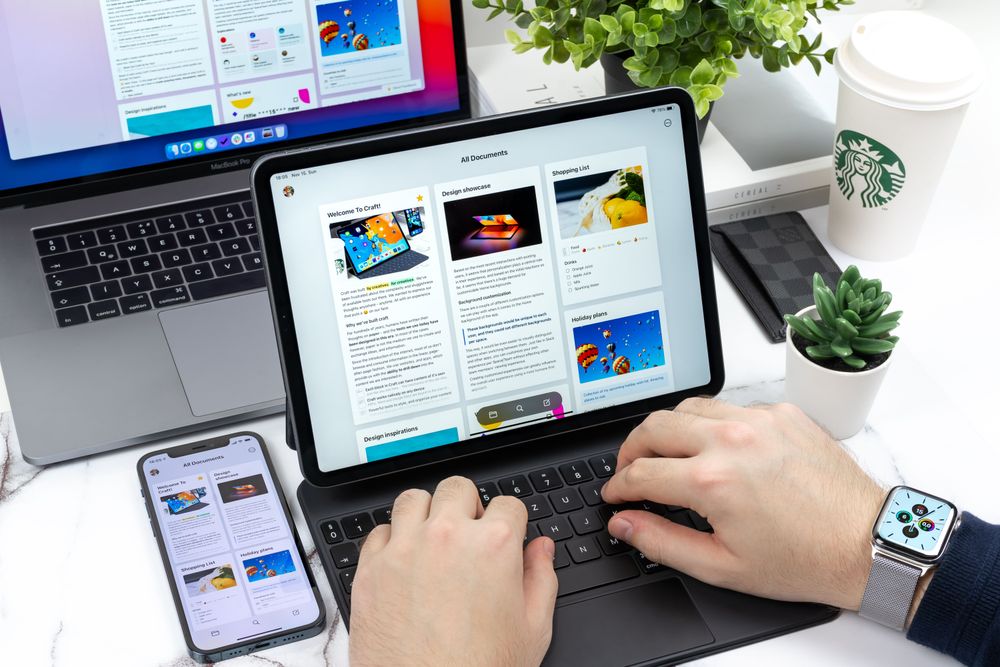 Where are you from and where do you live?

I'm from a city called Nyíregyháza in the north-east of Hungary. It's two and a half hours away from Budapest. I have an apartment in Budapest as well, and I like switching between the two cities.

Nyíregyháza is closer to nature which helps me focus on work and tackle the deeper challenges with designing Craft. But I also love to be in the Budapest office too where we can have collaborative sessions and workshops. The mix of both places works perfectly for me.

How did you get into design?

Many people are surprised to hear that I never studied design. I studied International Business and Marketing Psychology, in Budapest and also in the Netherlands.

So everything I have learned about design - I learned by myself.

Even as a kid I was really intrigued by palmtop devices, like pocket PCs and early smartphones with Symbian - a now defunct mobile operating system. I loved to play around with phones and of course, I'm a huge Apple fan since the introduction of the iPod and Mac OS X Tiger.

So, I started writing reviews of iOS apps for a small Hungarian tech blog. After the introduction of the iPhone I wrote more than 300 reviews in one year.

I don't like to criticize a design unless I can provide an alternative version. So when I was testing out apps, I would usually reach out to the engineers and try to help them with my ideas for improvements.

I discovered that it was easier to give visual feedback rather than written feedback, and that was around the same time that Sketch appeared. Before that, I tried to use Photoshop but it was complex and had a really steep learning curve, whereas Sketch was really simple.

So explaining my feedback and ideas in an easily understandable way using Sketch was really how I started to cut my teeth in design.

Then I started creating case studies and concept apps. Because I would have all these ideas for new apps that could solve problems. That attracted attention and led to me getting offers of work from clients so I started as a freelance designer working with different companies. One of the first things I did was create a course on 'Sketch for beginners'.

What attracted you to Craft? Why is it an interesting place from a design perspective?

It wasn't just the design of early Craft prototypes itself but the speed of design implementation that got me excited about joining the team.

Balint, Craft founder, saw some of my work and initially reached out to me. I have to admit that at first I thought "this is just another note-taking app - what's so special?"

But, as soon as I tried it out for the first time, I was like "Ah - OK - this is really interesting!"

Even the first prototypes were so polished, and the implementation of detail was so high. I started working on it and whenever I had a design idea, Balint was able to quickly prototype it within a couple of days. It was that speed of shipping that really got me excited along with a quality level I’ve never experienced anywhere else.

I've worked with a lot of companies and I'm sure a lot of engineers have had similar experiences, where it takes months or even years to see your work and ideas actually get built into the live product.

But with Craft, I'd never seen a team create such a high quality, working prototype for an app so quickly. It was making all of my design dreams come true! Because suddenly, all my ideas and concepts were actually getting built within days.

So I'm really happy with the engineering team at Craft. It's really a unique situation for me as a designer; the speed at which we go from ideas to implementation.

I also love Craft's experimental approach. Rather than trying to judge if something will work on 'paper', we just code it up, use it for a couple of days or weeks and after that we can make a decision. Working at this release velocity means we can very quickly iterate our product to find the best design solutions.

You're very active in the wider design community - tell us more

I was learning about all these case studies and concepts, but I realized it was important for me to share those learnings. It was also a way to attract clients.

If I wanted to get clients I had to use channels where other people would see my work; people who might need a designer. That's how Instagram came onto my radar. I set up an account (@danielkorpai) and got into the habit of posting regularly.

My initial goal was to hit 10k followers because once you hit that, you're allowed to share links in your posts - which would allow me to share my longer form design case studies which I host on medium.

Thanks to posting every single day and the Instagram algorithm, my channel took off. And since everything I had learned about design was via the design communities, I felt that presenting my work was also an opportunity to give back to that community.

I'm also into product photography and share my pics for free on Unsplash.

Where do you get new design ideas from?

When I first started out, I followed designers on Twitter, on Instagram and on Dribbble. I also like sidebar.io; they collect the top five design links from around the world and send you a daily digest email.

Nowadays I spend more time designing than looking for design inspiration. But of course, I look at our competitors, I look at other note-taking and productivity apps, and just other apps I like.

One completely different area I love to play with is screen interfaces in cars. I'm also really interested in smart home gadgets and their voice interfaces and touch screens. Plus I'm a huge Apple fan; I have all the devices so I can see how they are doing things. I try to be immersed in this environment as much as possible.

What advice do you have for someone who wants to get a job in design?

The most important thing is to be passionate about devices and how the software is designed. You have to be immersed in the world of gadgets and apps; then you have the chance to get better.

To help with this, I recommend trying to recreate the designs of existing products. I think it's really important. A lot of designers don't practice 'copying' enough. And by copying, I mean you recreate the design of an app as a practice exercise. Never share it as your own work!

Just screenshot something and try to copy the interface pixel by pixel, with the same shadows, the same font size, the same colors etc. It's like practicing the piano; you have to build a kind of muscle memory for the piece of music that you are playing.

Finally - I recommend trying to articulate what you learn and present it through case studies, to share your work. That also reinforces everything that you just learned.

That is the journey that worked for me.

You are known for being a gadget guru; how have they influenced your lifestyle?

I’ve been obsessed with gadgets since my early childhood. It started with mobile phones, TVs and VCRs, but during high school I discovered that I could use my love for gadgets to improve other areas of my life such as fitness and lifestyle.

I was the kid who always failed at the mandatory 12-minute running school test; being a little overweight, I wasn’t able to run 12 minutes straight without stopping. But then I discovered this new thing called Nike+ running, where you could insert a small chip/tracking pod into your running shoe, sync it with your iPod and track your running metrics, while listening to music.

One year after finding this, I completed my first official Nike+ Half Marathon in Budapest. It was one of the proudest moments in my life; going from the kid who had to drop out of the fitness test, to completing a 21km race. And it was all thanks to the motivation and support from gadgets, smart devices and music.

How do you use gadgets in your everyday life now?

After my running experience, I realized I could continue using my gadget passion to improve my health and everyday environment. Over the last 5-8 years I started to get deeper and deeper into smart homes, starting with simple Philips Hue lights and experimenting how significant the effect of light can be to our moods, productivity and overall wellbeing (especially during the winter months).

Then I started playing with air sensors (Netatmo) to measure air quality and improve it (Dyson); robot vacuum cleaners (Roborock) and smart doorbells (Eufy). Most recently, it's health gadgets that I've been exploring. They've helped me recharge my creative batteries in a more efficient way, and I’ve been using the Oura ring to track my sleep, Apple Watch and Elite HRV to track heart rate and HRV (Heart Rate Variability) which measures stress levels. I even use HidrateSpark Smart Water bottle to automatically track my water intake for the day!

Regarding sleep and food, my parents and friends tried to convince me for years not to stay up until 3am every morning working watching TV, and not to eat Pringles and Haribo Gummy Bears almost every second night.

Of course, I didn’t listen to them. But when I got my Oura ring to track my sleep and could actually see how bad it was, I started to move my bed time earlier and earlier. Then when one night I skipped the late night snacks and saw such a drastic improvement in my sleep score and wellbeing the next morning that I was immediately convinced to change my habits for good.

Measuring all this biofeedback has even motivated me to try out ice water immersions recently. That was a big step up from cold showers, but it improved my mood and sleep like nothing before and I can see its effect on multiple charts and graphs!

I’m constantly amazed how far we’ve come with the technology and gadgets over the last couple of years. We even have apps for things like intermittent fasting and a special smart scale for creating morning coffee: Acaia.

All these devices and gadgets have helped me a lot and motivated me massively in my everyday life. And since I’m constantly trying out new apps, new devices and new services, they also serve as a superb source of design and interaction inspiration on different platforms.

Want to talk design and gadgets with Daniel?

How an author writes best selling books with Craft
How indie author Adam Eccles uses Craft to write books (+ his tips on how to sell more)
How to create actions from meeting notes
Make your meetings more productive and focused by creating action points. Here's how...
How to write meeting minutes (template included)
We discuss the process for taking meeting minutes and how to do it effectively.
View All Posts