Our Offsite Adventure on Lake Balaton 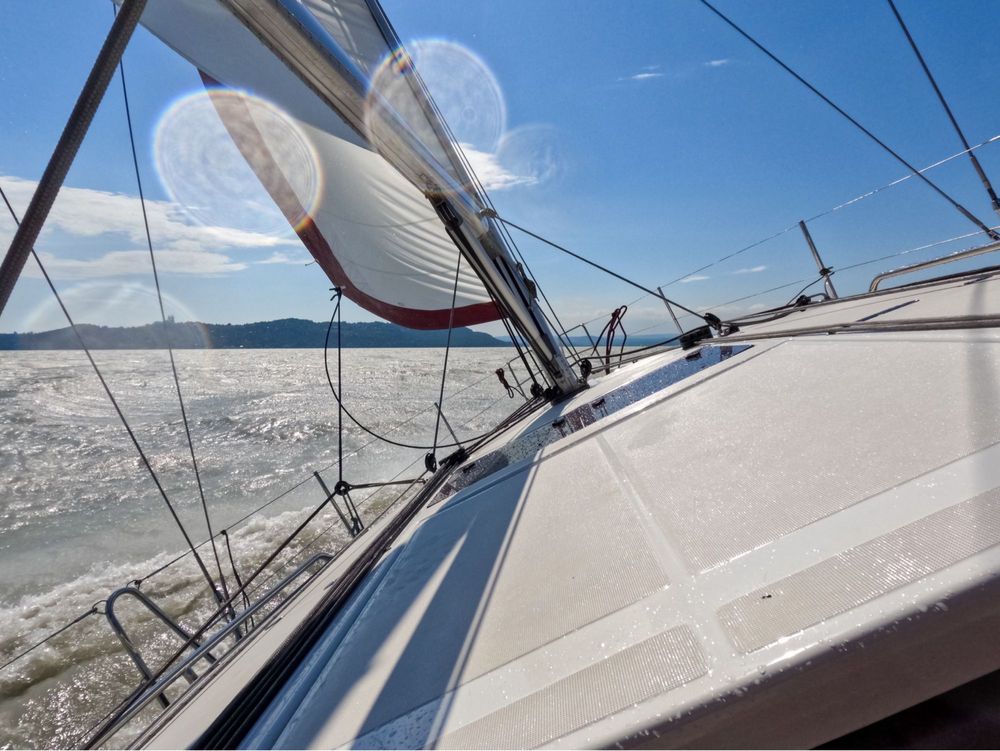 Craft HQ is located in beautiful Budapest. But of the 30+ team we now have, a third work outside of Hungary. And even for the Budapest-based, most of us work in a hybrid-fashion, coming into the office on Tuesdays and Thursdays, and working from home the rest of the week.

This type of flexibility has many benefits, but as many have discovered since COVID-19 normalized remote working, to truly get to know each other, we need time together in the same physical location.

This is what made the Craft Summer '22 offsite perhaps even more appreciated than it might have been in pre-corona times.

Team members arriving from the UK, Poland and Slovenia assembled alongside the Hungarian crew on a Thursday morning in central Budapest, where we boarded two buses. Our destination? Balaton; Hungary's largest lake, a beautiful body of water that stretches out some 80km and is edged by rolling hills, vineyards and beaches. 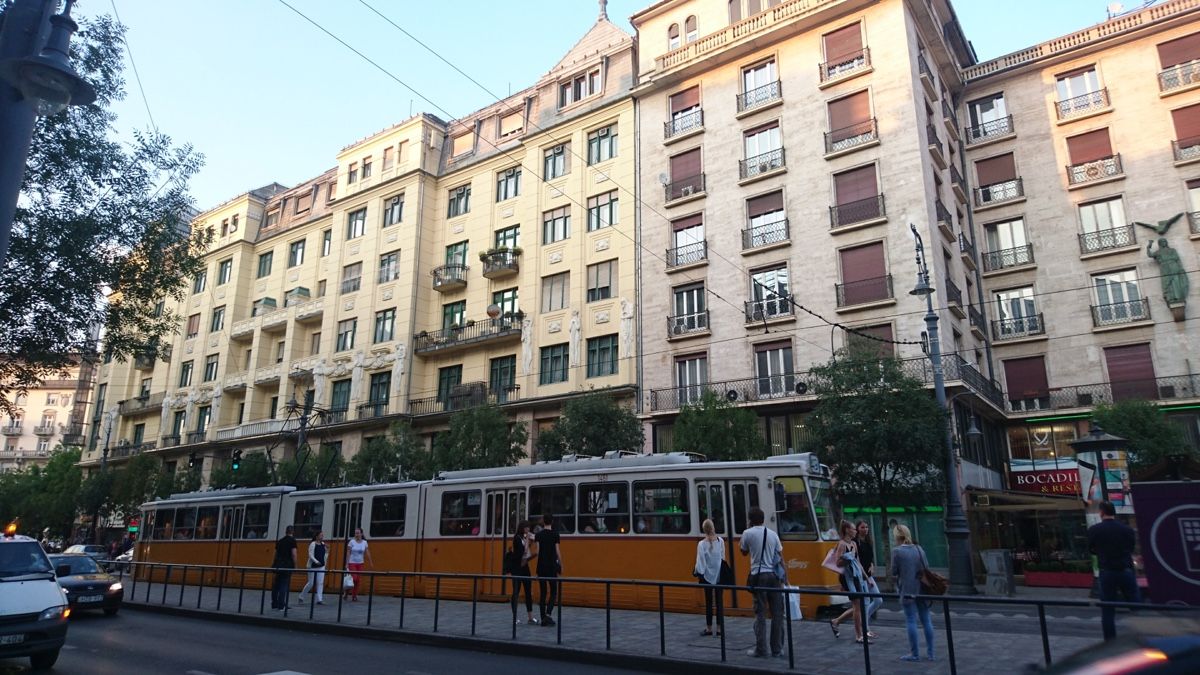 Spirits were high but the forecast was dire. Rain pelted us as we left Budapest's ornate architecture behind and entered a landscape of flat, green fields, ruffled by small, church-topped hills.

Our base was Balatonfüred - a pretty town on the north shore, dotted with grandiose villas, thatched cottages and lakeside shacks. We were staying at the lovely Hotel Annuska, a boutique establishment originally built in 1894, oozing nostalgic charm, with wooden balconies from which you could spy the waters of Balaton. 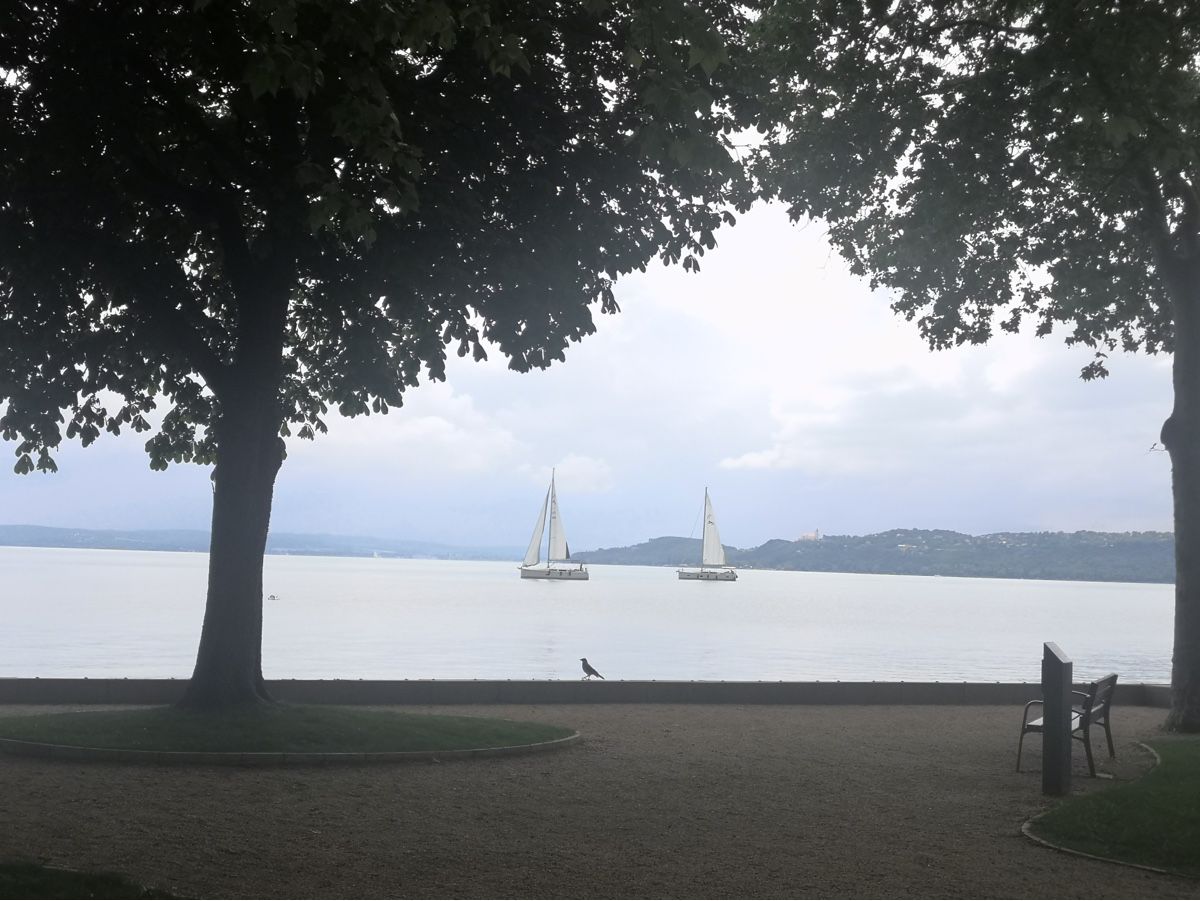 After lunch at a shore-side eatery where many of us sampled the Hungarian delight of langos - a deep-fried flatbread with a choice of toppings - we split into two groups: one bound for the race track, the other for the laser-tag arena. 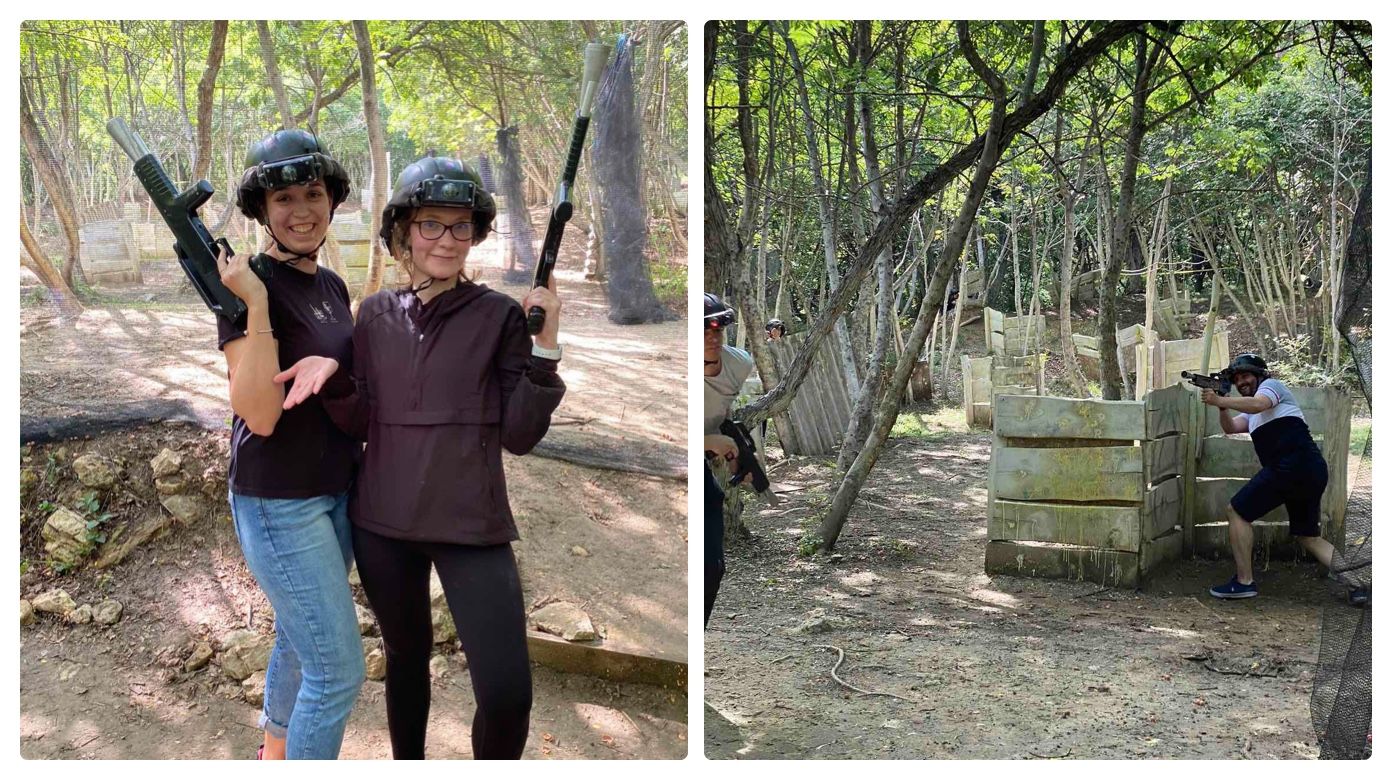 It was a great kick off to the offsite and an intriguing insight into the competitive nature of our colleagues. We ended the evening at another lakeside restaurant, retiring at a respectable hour, in anticipation of main event the following day.

When Sailing Gets Extreme: Voyage to Tihany Peninsular

We had signed up for sailing. A pleasant pootle around the shallow waters of Balaton; a light breeze, gently pushing us through the mellow waters. We envisioned toasting fröccs (wine spritzer) whilst the wind tussled our hair and the lake lapped quietly at our hull. 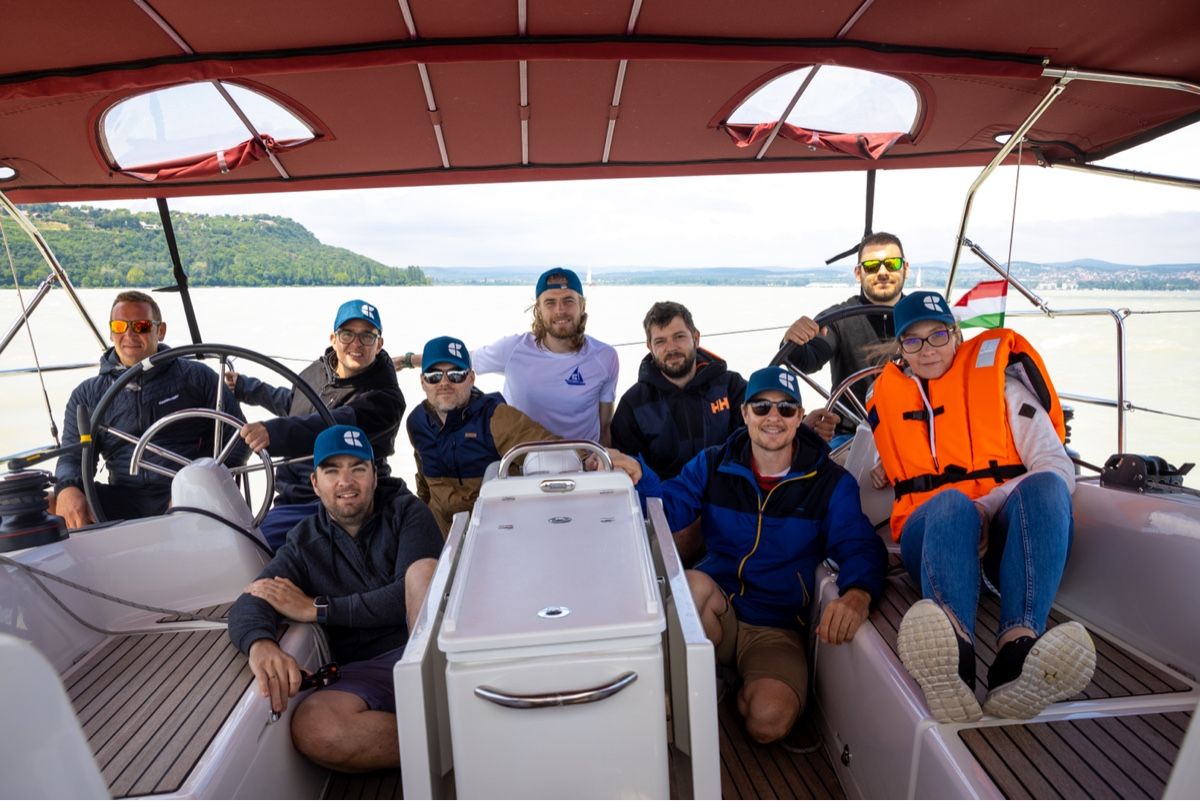 What we hadn't signed up for was a leg from the Clipper Around The World Yacht Race. The previous night a vicious storm had raged and although by morning the heavy rain had passed, the strong winds remained.

This provided us with what some claimed were 'the perfect sailing conditions'. Plenty of wind, not too hot, and no rain. Others were less convinced as to the perfection of gale force winds for their first time aboard a sailboat.

We split into three teams - denoted by our snazzy, new, colored Craft t-shirts - and after a quick lesson in tying competitive bowline knots - we boarded three yachts. Each came with an experienced captain. 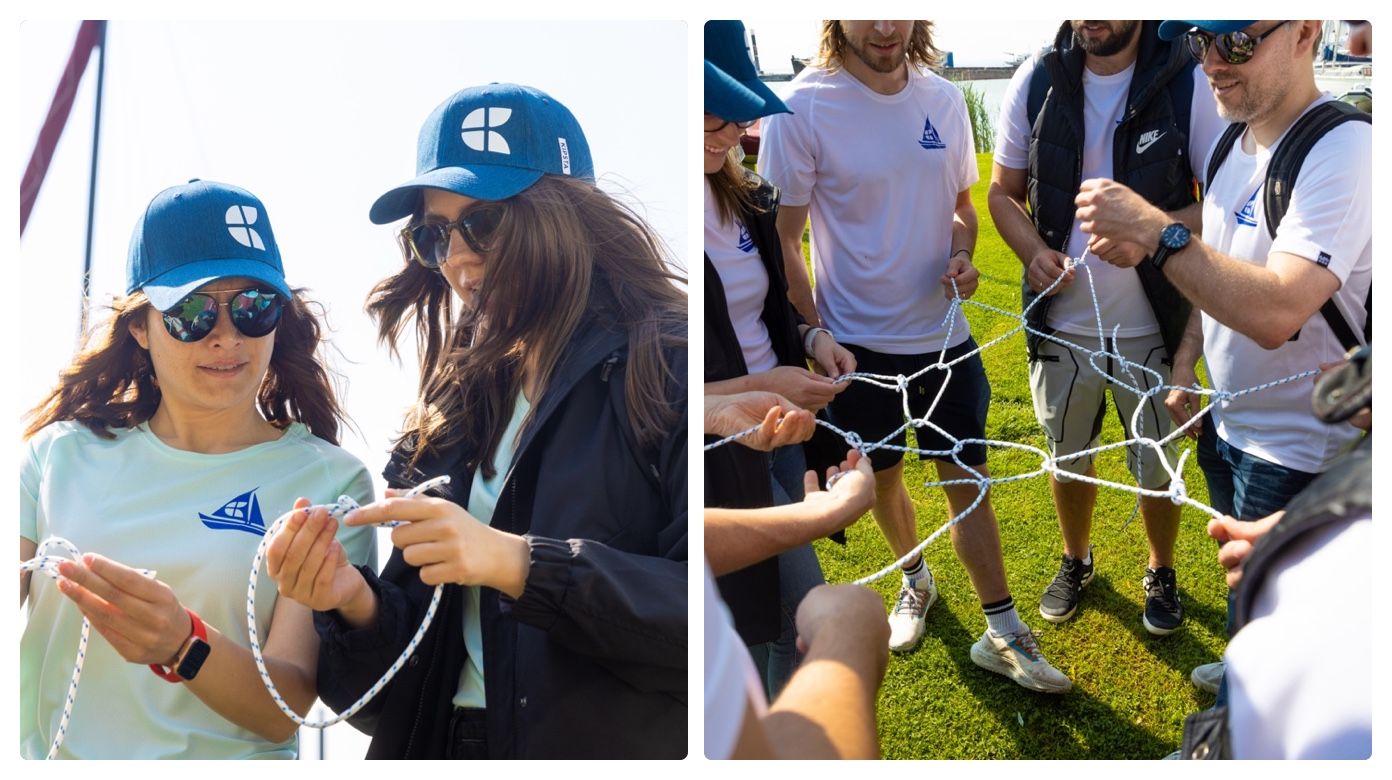 Chugging out of the small marina, we raised our sails and were soon cutting through the choppy waters of Balaton entirely under the power of wind. Once our mainsails and jibs were fully hoisted, our boats were able to harness the hurricane-like gales. They pitched right over on edge, at an angle that seemed - to the 'landlubbers' at least - fairly close to tipping point.

"These boats are almost impossible to capsize" said Aki our captain.

We pondered the 'almost' part of his sentence as we desperately clung to what ever we could, wedging our feet against any fixed object to prevent us from being thrown off the boat. Team members became much closer as we grabbed on to each other, hauled each other from port to starboard as we made 'about turns', and generally just held on for dear life. 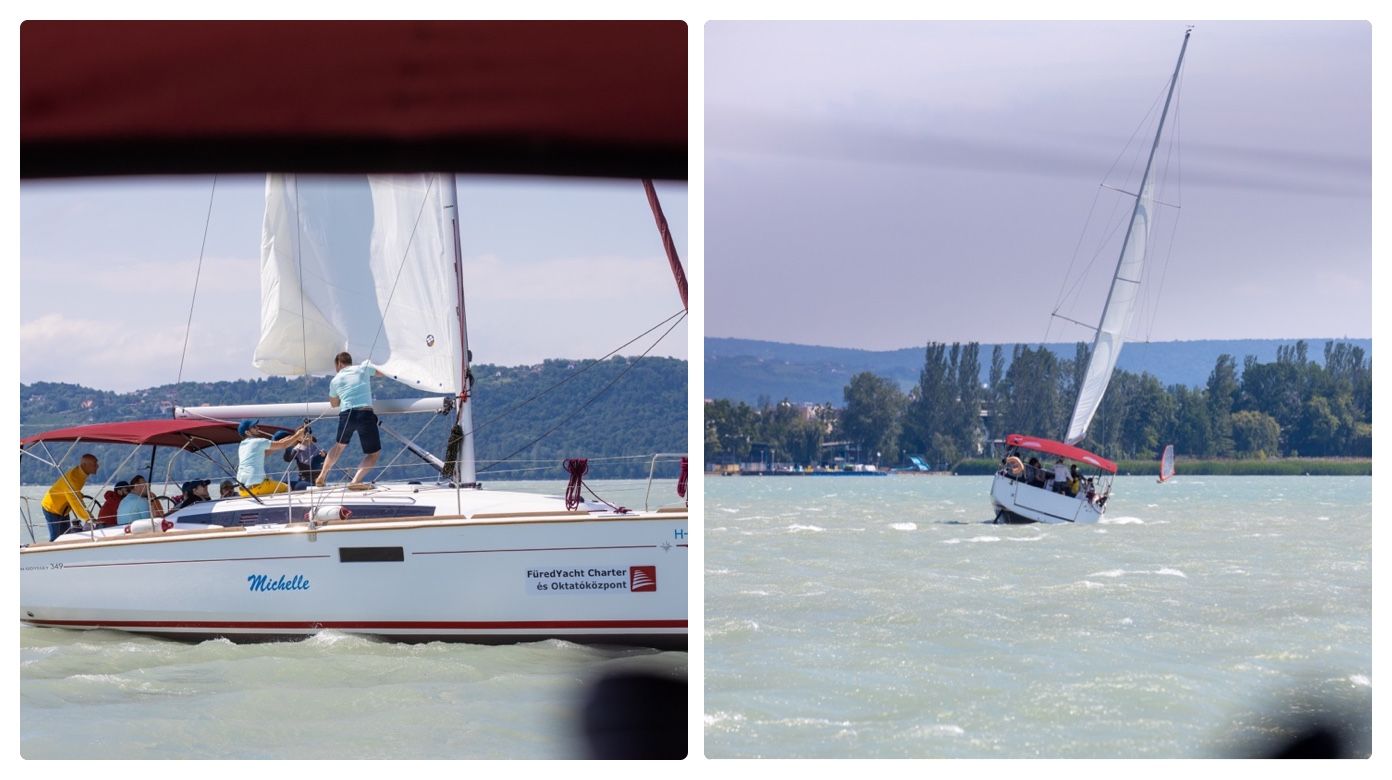 Under instruction from the captains, we pulled ropes, wound pulleys, and took turns at the wheel - trimming, tacking and jibing our way towards the Tihany Peninsula, a hilly spit of wooded land that projects far into the lake from the northern shore. It was a great feeling to be out on the water, cutting along at speed, and big smiles, laughter and whoops emanated from each boat. 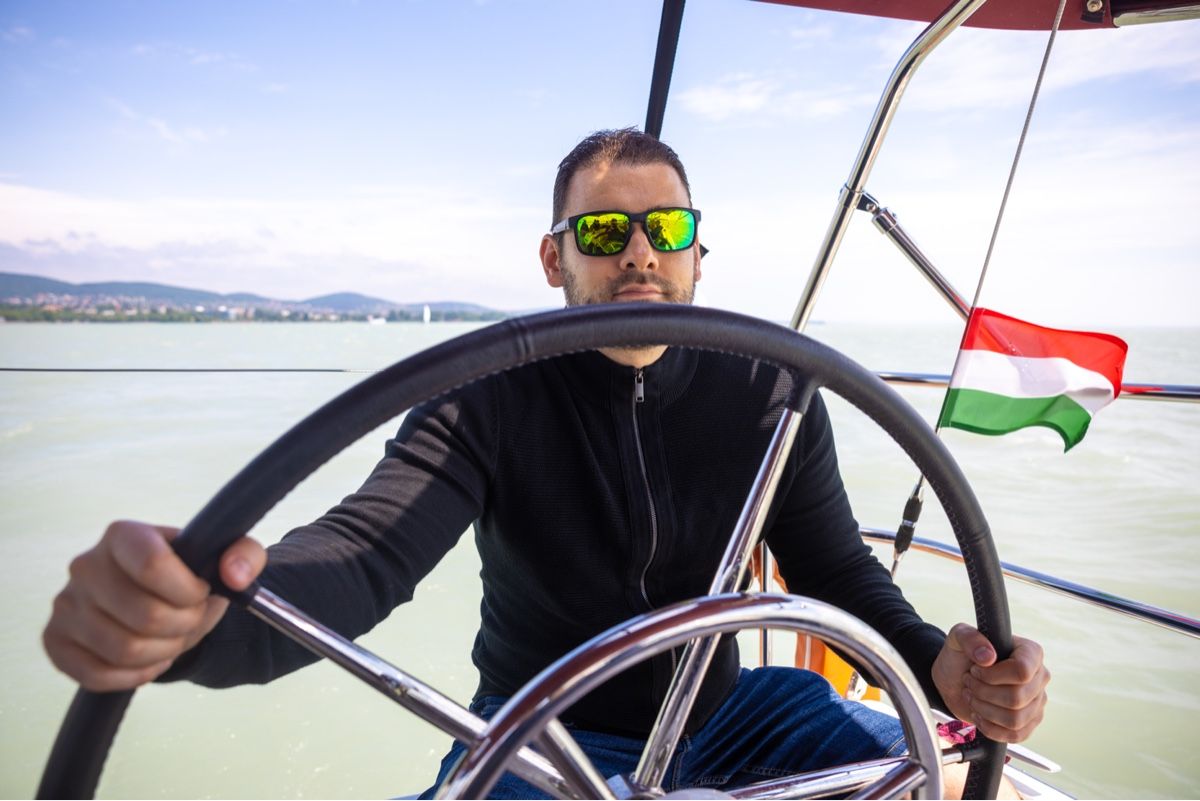 After an hour or so of high-speed sailing, we reached Tihany, and moored up. Many were delighted to be setting foot on dry land without any (wo)man-over-board incidents. Climbing a steep hill, where we passed a remarkable house with not only a thatched roof, but thatched walls, we reached Echo restaurant where a delicious (and enormous) lunch was served. 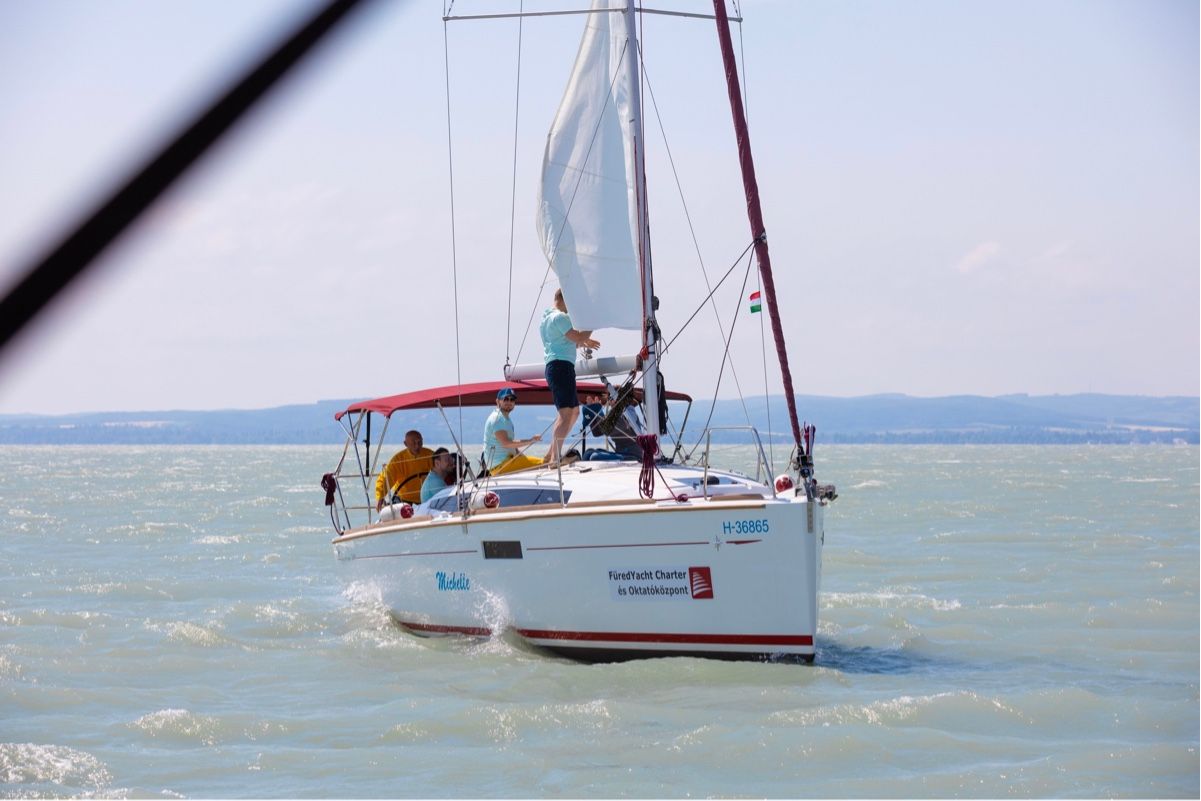 As we ate, we observed the panorama from our hilltop viewpoint. Nervous comments regarding the wind were whispered. It appeared to be increasing even further in strength, with white horses cantering on the water, and a distinct lack of any other sailing boats braving the tempestuous conditions. 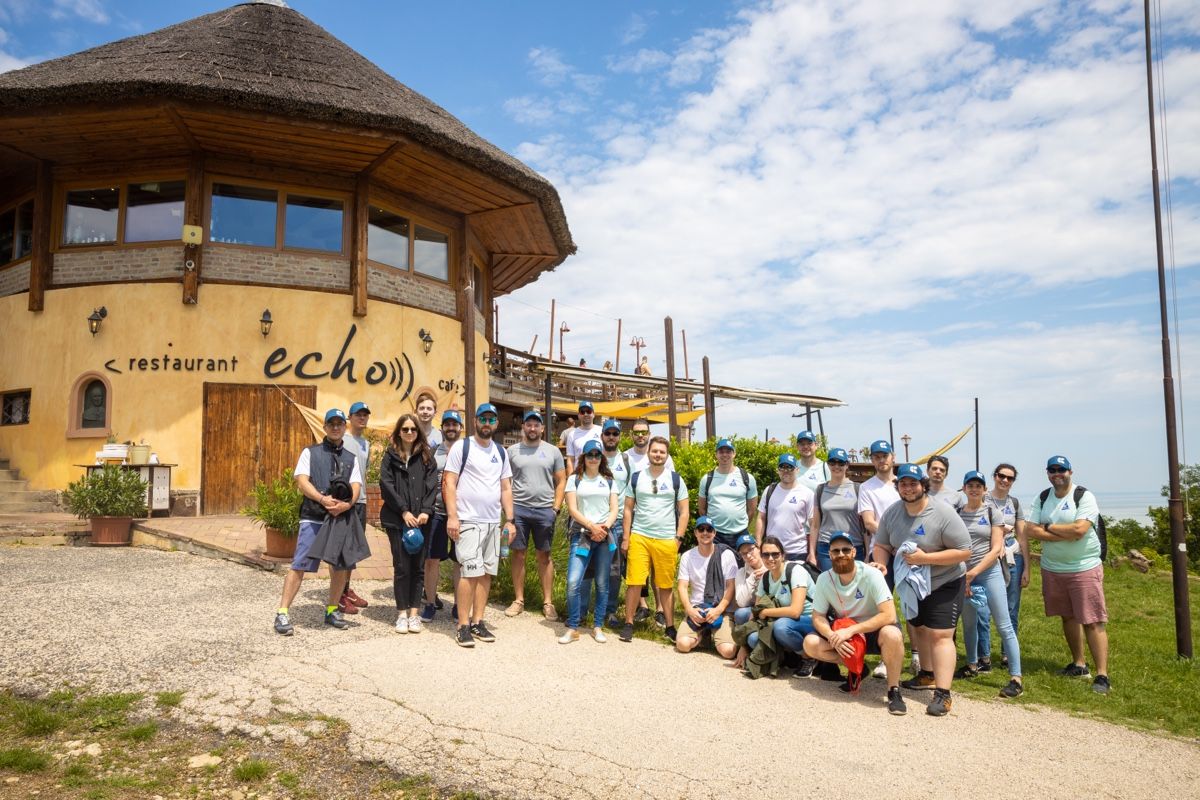 With bellies bursting, we descended the hill back down to lake level. The waters were now even more choppy, and a couple of the crew, already feeling full from lunch, concluded that projectile vomiting over their colleagues would do little for their personal brand, and thus made the return journey by car.

For the rest of us, it was waterproofs on, hoods up, hang on. It was evident that the return voyage would be a far more serious journey. Not only because we were in genuine danger of falling off the boat, but also because the race was on!

Raising the sails as far as we dared, our boats pitched to near vertical as we cut through the water. Ropes and pulleys rattled and strained, and we were continually drenched by waves crashing over the hull. Again, we clung, hung and wrapped ourselves around anything or anyone we could, to prevent being blown or thrown off the boat, as we powered towards our starting point. 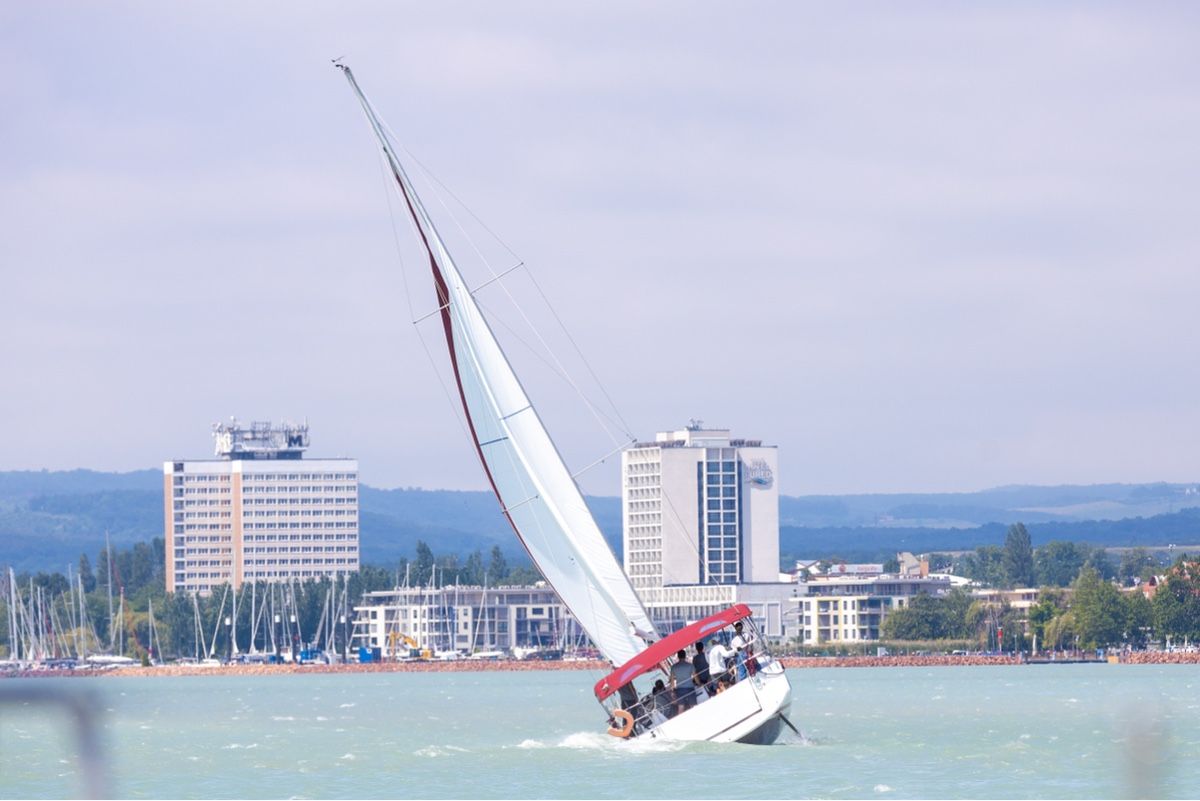 It was genuinely exhilarating (if you like theme-park rides). Our expert captains guided us skillfully, and most of the Craft crew seemed to enjoy getting thrown around by wind and water. Team White, Green and Grey jostled for pole position was we jibed and tacked our way towards the finish line.

Team White went so fast they broke their boat. Crew members recalled a tense moment as the captain clambered over the hull to inspect the damage. Vital shackle pins had come loose on the boom and our lines were lashing around, flinging pulleys at a force that would have removed teeth had they hit.

And thus ended Team White's day of sailing. We retracted the sails, storing them away safely, and completed the remainder of the journey under diesel.

Team Grey was declared the winner, and we all headed back to the hotel for a garden party, where we saw out the night with local wines, beer and food, a few lawn games, and a much-spectated chili-sauce eating competition (which some competitors later regretted). 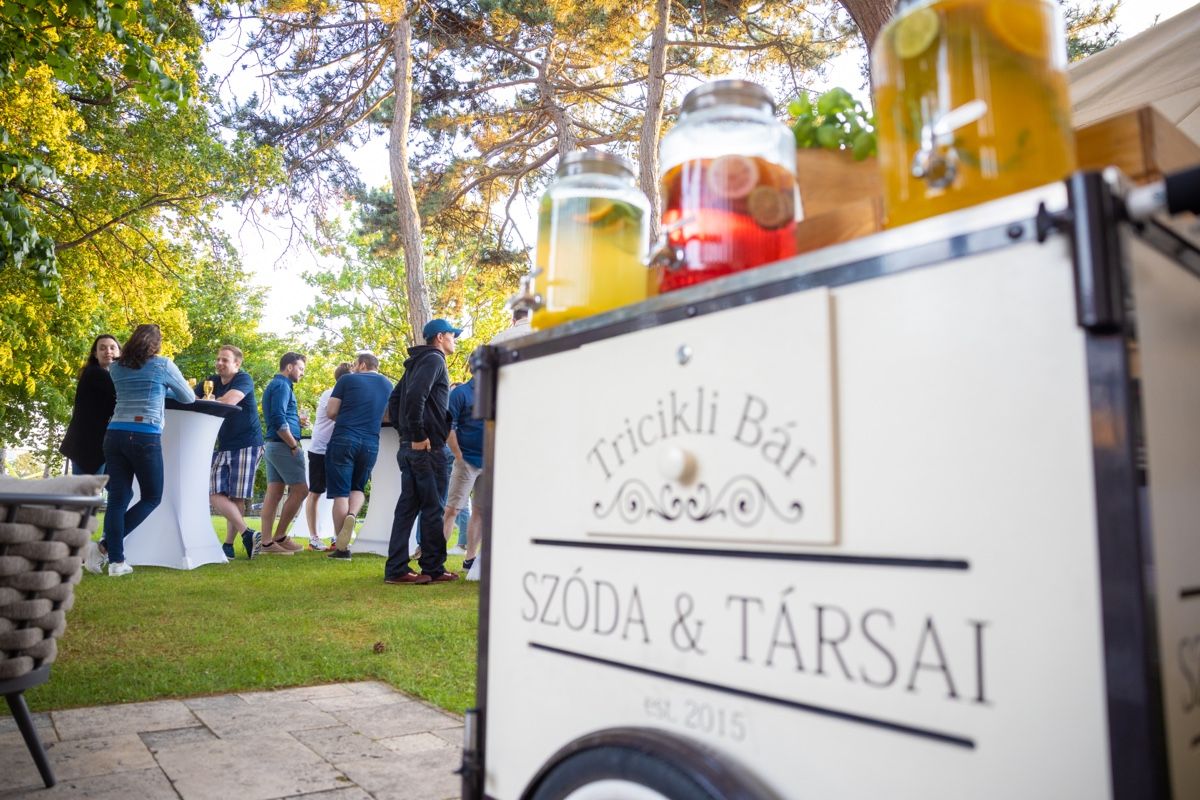 Why Getting Together Matters

After a two-year pandemic and so much remote working, our offsite adventure was a reminder of why it's so important to spend time in the company of colleagues. Stories were created, bonds were built and new friendships forged. It was a great two days - excellently organized, and brought the whole Craft team closer together than ever before.

A huge köszönöm to all those who put it together - we can't wait for next one. 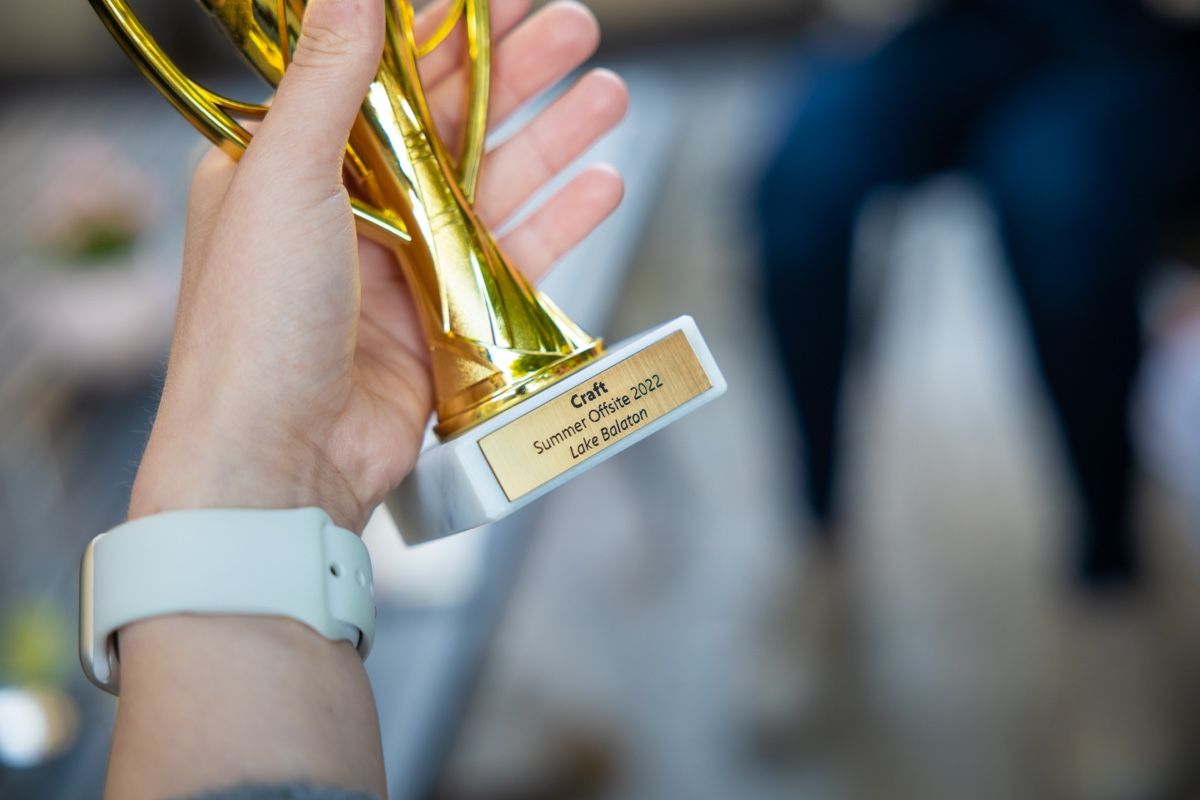 From Pastors To Pomodoro Playlists: 6 amazing uses of Craft
Discover a few of the ingenious uses of Craft by our community, from pastors to podcasters to playlist compilers as we showcase their Craft work.
9 effective ways to successfully onboard a new employee
Onboarding new staff is vital for happy teams. Here are 9 effective ways to get new employees up and running
5 mistakes companies make with remote teams (and 5 solutions)
If not managed correctly, remote teams can become disorganized, demotivated and inefficient. Here are some of the mistakes companies make with remote teams, and how to avoid them
View All Posts